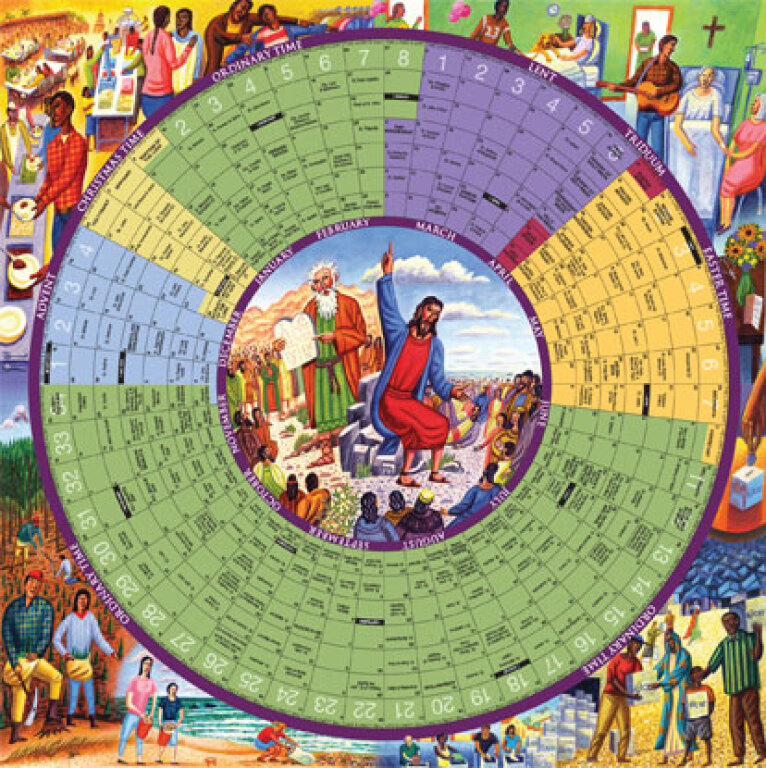 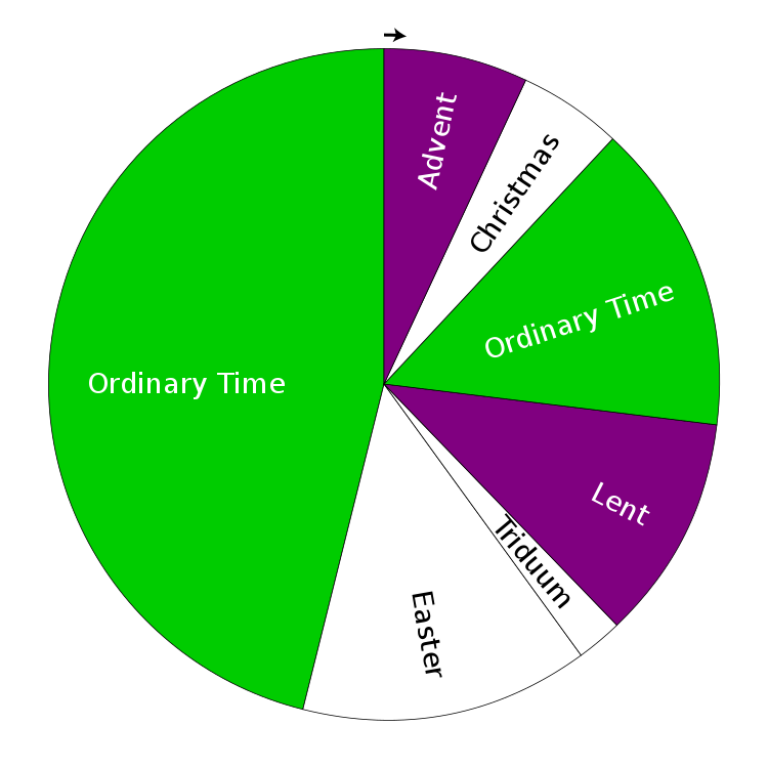 Like most cultures, our Judeo-Christian tradition is guided by cycles of time.  Though    distinct from civil time, sacred time is not separated from it but gives it meaning and    makes it sacred. God, the author of history, is present and at work in history, and it is    through the two concentric circles of civil and sacred time, that we live and work out our   salvation.

What Is the Church’s Year of Grace?

The Catholic Church’s liturgical year of grace is so called because, through her liturgy, the Church makes present the saving events of the Lord, his passion, death, and Resurrection.  This graced-filled year is an infallible teacher educating us in reverence for the time we have to live out our lives with meaning in Christ. Over the course of a year, through signs, symbols, and the sacred arts, the Lord’s mysteries unfold.  In some European countries, the feasts of Epiphany on January 6th, Corpus Christi, and the feasts of Saints Peter and Paul are not only religious feast days but also civil holidays. The whole mystery of Christ unfolds from Advent to Pentecost, and finally to the feast of Christ the King. Then the cycle begins anew.  As the liturgical year is repeated, it becomes the primary way in which the Catholic can sacralize the year, the week, and the day. “The liturgical year, devotedly fostered and accompanied by the Church, is not a cold and lifeless representation of the events of the past, or a simple and bare record of a former age,” writes Pius XII; “it is rather Christ Himself who is ever living in His Church” (Pius XII, Mediator Dei, #165).

The Liturgical Year, Week, and Day

Living the Church’s year of grace calls for an understanding and devotion towards the year, the week, and the day. The year has been developed according to two cycles: the temporal and the sanctoral. The temporal cycle includes: (1) the Advent-Christmas cycle, or, in the Byzantine Churches, Philip’s Fast-Christmas, (between November 10th -14th), and (2) the Easter cycle, Lent, Passiontide, Easter and its extended celebration, Ascension, Pentecost. The Sundays after Pentecost to the Christ the King belong to Ordinary time. The sanctoral cycle celebrates feasts of the Mother of God and the saints according to the calendar year.

If Easter is the center of the liturgical year, then Sunday is the weekly celebration of Easter. Sunday, the Lord’s Day symbolizes the eternal rest and joy of heaven. It points to a state of peace between man and nature and a faint resemblance of that messianic kingdom where lion and lamb lie down together and swords are turned into ploughshares (Is 11).  The day, every day, brings with it its own ups and downs when we unite with Christ in his Paschal Mystery.

Liturgical Life in the Middle Ages

In medieval times, the Church year guided the lives of the faithful and united them in a spiritual bond.  From Baptism to the Eucharist to the Last Anointing, from processions and pious devotions to blessings of crops, animals, and boats, the church year “shaped their perception of the world and their place in it,” and these “central moments gave Catholics the key to the meaning and purpose of their lives” (Eamon Duffy, The Stripping of the Altars, 11-46). As a way of making sacred the French countryside, churches and cathedrals dedicated to the Mother of God were built in strategic locations to resemble the constellation Virga. The French cities that formed the constellation of Virga are: Amiens, Evreux, Rouen, Bayeux, Spica, Chartres, Paris, Reims.